Thermoplastics; It is the general name of the plastic group which softens when heated, and which hardens again when cooled. It has covalent, inter-chain van der walls bonds in its structure. All polymers show a high rigidity (elastic modulus and shear modulus) at low temperatures and are crisp. The thermoplastics can be melted and dissolved again and again. This has a special meaning in terms of environmental protection and recycling. Thermoplastics are perfectly suited for recovery if their major species are not mixed with each other. So theoretically, a bowl of a few thousand yogurt bowls can be produced. Another advantage is that the cracks and fractures can be welded with heat. At a given temperature zone called the glass temperature Tg (freezing temperature), the chain molecules acquire a certain thermal mobility. This makes the material easier to bend and becomes ductile. However, secondary ties and knots that occur as a result of movement prevent slippage. The material is thermo-elastic. Thermoplastics have temperature dependent properties: elastic modulus, strength and ductility. If the temperature rises further, the primary bonds begin to dissolve one by one, the molecular chains are broken down and become low-molecular substances and the material is damaged. Thermoplastic Matrices; Although the types of thermoplastic polymers are very high, polymers used as matrix are limited. Thermoplastics are hard in low temperatures and soften when heated. Compared to thermosets, their use as matrix is ​​less, but they have advantages such as superior fracture toughness, long shelf life of raw materials, recycling capacity and providing a safe working environment due to the lack of organic solvents for hardening process. In addition, the formed thermoplastic piece can be reshaped after heating. It can be stored in a thermoplastic cooler at room temperature without waiting. Thermoplastics have high hardness and impact strength properties. With the new developments, thermoplastics provide these surplus values ​​from the term thermoset matrices 977-3 Epoxy and 52450-4 BMI resins. The main reason why thermoplastics are not preferred as matrix in composite materials is the high cost of production as well as the difficulties. They provide low processing quality at room temperature, which leads to a loss of time in production. Solvents may be required to introduce some thermoplastics into the desired shapes. Thermoplastics are more expensive compared to thermosets. Continuous usage temperatures range from 60 ºC to 245 ºC. Initially, polyethersulfone (PES) and polyetherimide (PEI) were used as amorphous resins. In the following period, resistance to solvents for aerospace applications has emerged as an important criterion. After this requirement, semi-crystalline plastic materials such as polyetheretherketone (PEEK) and polyphenylene sulfide (PPS) were developed. It is also used in plastics such as polyamideimide (PAI) and polyamide (PA) in limited proportions. Unlike other thermoplastics, these polymers complete their polymerization at the curing stage. The most intensive studies were performed on polymers used at low temperatures such as PA, PBT / PET and PP. Apart from all these polymers, ABS, SAN, SMA (Styrene Maleic anhydride), PSU (Polysulfone), PPE (Polyphenylene Ether) are used as matrix. Thermoplastic resins are used to increase the tensile and flexural strength of the material. Thermoplastics, which are widely used in the automotive industry, are also used in aircraft industry for high performance material solutions. It is mainly produced as GMT (Glass Mat Reinforced Thermoplastics) in the production of thermoplastics produced by injection and extrusion molding methods. Reinforced thermoplastics prepared with this method are preferred especially in the automotive sector because of the compatibility of cold plates and recycling process. 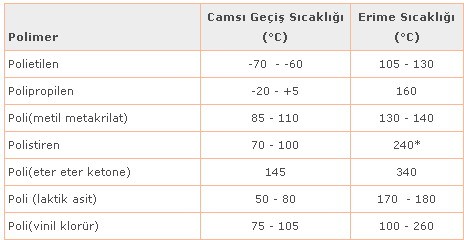 Cellulose is a natural polymer found in plants and is usually derived from cotton or wood. Raw cellulose is made by dissolving in water; Purified. It is then regenerated by a suitable chemical reaction and dissolved. The process is arranged to be drawn in the form of a plastic fiber or sheet. As a result of different processes applied to cellulose; a wide variety of fibers can be made and these are classified as rayon. The strength of the fibers can be increased by stretching. The plasticity of the raw cellulose layer should be plasticized because it is too low to be used. It is the best plasticizer water and it enters into the body by 1% by immersing the plastic layer into the glycerin. Glycerin has a plasticizing effect, but also absorbs water by keeping the plastic. Other plasticizers may also be used. The non-plasticized layer is permeable to water vapor and coated to make it impervious to packaging. The most commonly used coating material is cellulose nitrate based varnish. The heat-proof film obtained at the end of the coating is used in the packaging and is known by the name of the cellophane. Another coating method is the ‘sandwich’ film obtained by placing cellulose between two film layers, such as polyethylene. Cellulose nitrate is obtained by reacting nitric acid with cellulose. In this reaction, some or all of the hydroxyl groups in cellulose are displaced: Cellulose nitrate flammability is not suitable for injection or pressurized molding, but special blowing methods and table tennis balls are made. This form of material is usually called celluloid. The development of non-flammable thermoplastics has limited the application areas of celluloid. Cellulose nitrate layer; cracking and discoloration can occur if left in the open air for a long time. This plastic can be combined with various cements. The most commonly used solvents are acetone, ether alcohol and amyl acetate. The superiority of cellulose acetate to nitrate is its non-flammability. The first product of acetylation of cellulose is triacetate and the hydroxyl groups are completely substituted. This material does not dissolve in most of the solvents. After hydrolysis, the compounds are various products ranging from diacetate to triacetate. These types of plastics are mixed in dry form with the plasticizer and then are formed into sheets and ground into standard profiles to obtain mold powder. It is also odorless and tasteless and has the ability to swallow sound waves. They can be welded and polished. Tool handles, switch handles, furniture, steering wheel covers, toys, spectacle frames, writing devices, etc. Can be used in places.

It is a linear polyester made by condensation polymerization. It is a plastic crystal and is well below the glass transition point at normal temperatures. An amorphous plastic is obtained when the molten state is cooled rapidly below the glass transition point. This amorphous plastic is recrystallized when heated above the glassy transition point. Polyethylene terephthalate is widely used as filament. The fiber is obtained by extrusion of the molten plastic. Filament material is used for making fabrics with special applications such as rope and filter. Polyethylene terephthalate is also available in film. The film is extruded from the molten plastic and cooled rapidly to obtain an amorphous shape and then heated to the glassy transition point immediately upon stretching. The stretching is applied in one direction and then in the vertical direction. The film is then heated a little more so that the crystallites are directed in the plane of the film. This film is highly resistant, permeable and thermally stable. The electrical properties are also very high. There are many applications in the electrical and electronics industry. It is also used in mechanical applications such as gasket and conveyor belt. Other applications include decoration, binding, typewriter ribbon and photographic film. In addition, sewage and clean water pipes (used at pressures up to 10 bar), foils used in packaging and construction material production, injection molded parts for household goods and toys, containers, cable and pipe sheathing, is used for covering the hair pieces.

Linear polyamide-type plastics are known by this generic name. Nylons are made by condensation polymerization of a diamine with a dibasic acid: Nylons can also be made by condensation polymerization of amino acids. Nylon can be made into fiber by melt-melting. The fiber obtained is stretched to increase the tensile strength. In the textile industry, rope, brush hair, tennis racket is used in products such as braid. Nylon has higher atmospheric moisture absorption properties than other thermal plastics. The amount of absorption varies between various nylons and affects the properties of plastic. The most drawback of them is the insulation resistance that limits the electrical applications of plastic. Nylon should be dried thoroughly before manufacture; otherwise, vapor generated during manufacturing may disrupt the surface of the nylon. Nylon parts can be manufactured by normal molding processes. It is also possible to manufacture the nylon in the mold by means of polymerization and large parts up to a ton can be made by this method. The most important features of nylon are high mechanical strength, abrasion resistance, high upper temperature limit and low friction coefficient. Nylons are expensive and are mostly used for their special characteristics. High pressure hose, conveyor belts, oil resistant bottles, wear resistant cable covers can be made by nylon extrusion method. By adding nylon to fiberglass, the mechanical strength and thermal degradation temperature can be increased.

Since a polycarbonate is a polyester of carbonic acid, this class of plastics is actually a member of the polyester group. The dimensional stability and impact resistance of this polycarbonate is very high. It maintains its mechanical strength in very wide temperature limits above and below normal temperatures. The light is permeable and if the pigment is not added, it is pale yellow. It is resistant to continuous outdoor conditions. The main drawbacks are the effects of some fluids and stretch cracks. It is in the form of mold powder in the plastic market and is suitable for manufacturing with normal techniques. It can also be found in film. Dielectric properties are used in most of the applications of this plastic. Current carrying conductive materials, switch box covers and capacitor housings can be counted. Polycarbonate film is used in making capacitor. It has a variety of applications, from baby feeding bottles to miner helmets, and also for its permeability. used in the construction of goods.

These plastics, which are mainly from the basic direction, are not made directly from formaldehyde; In order to stabilize the polymer, it is necessary to make some changes in the chain, otherwise the polymer will deteriorate. Molecular weights vary in quality, but they can be produced in different qualities depending on the type of change in the chain. Polyacetals are present in powder form and can be processed by methods which are valid for thermoplastics. The rigidity and strength of the plastic is high. Their most prominent advantage is that these properties do not vary between wide temperature, environmental conditions and time limits. Fatigue resistance is very good. Dielectric properties are good and plastic is a perfect insulator. This plastic product is not damaged by workshop operations and the friction coefficient is very low. Polyacetal mold manufacturing products replace magnesium, aluminum, zinc and brass alloys in many areas. These include bearings, gears, springs, chain links and door knockers.

The increasing use of polypropylene and nylon in engineering, the emergence of polycarbonate and polyacetals have led to the investigation of other high-temperature thermally-resistant polymers. At the end of this research, three new thermoplastics have emerged. These are polysulfones, phenoxides and polyphenylene oxide (PPO). These plastics are more expensive than polycarbonate and polyacetal, but their application potential in engineering is very high. The covalent bond is a description of the chemical bond characterized by sharing one or more electrons between two atoms. Usually, the bond can be defined as the common gravitational force that holds the resulting molecule together.